Unit Deals is a piece of functionality added in version 4.314 of c9 that allows you to build up a unit sale over a period of time, as a purchase order.

The intent of deals is to simplify the process of managing unit sales, purchases and tradeins by making the process more intuitive and more forgiving.  Prior process for selling a unit in c9 required keying in all data in one sitting.  Unit sales can be complicated animals, and expecting a user to key in everything correctly on the spot is something of a task.

The deal main screen lists all deals currently in progress. 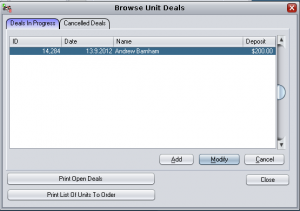 This screen, accessed when you add a new deal or modify an existing deal is where most of the work on dealing happens. There are 3 broad functions that happen in this area: 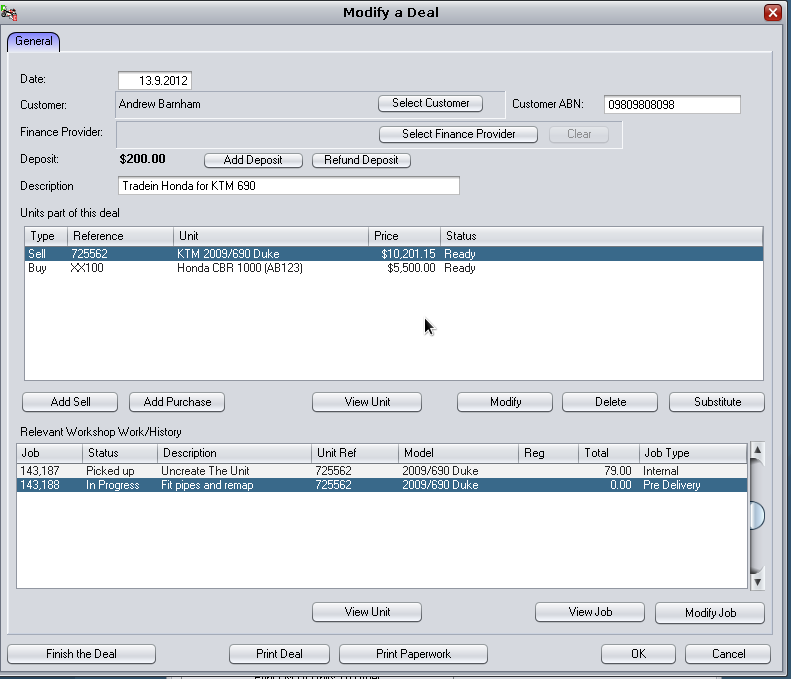 Use [add sell]/[add purchase] to add a unit to sell/unit to purchase respectively.

Add will open up a window to add a unit exactly same as prior sell/purchase/tradein screens.

Unlike prior sell function, you can setup a deal involving a unit not yet on the floor.  See below for more details

[Delete] Removes the unit off the deal

[Substitute] Keeps the unit on the deal with all keyed in information such as pricing etc, but substitutes the physical unit for another. For example same model on the floor but have different VINs.  This function is mainly useful for handling units on a deal but not yet on the floor.  See below

[Finish Deal] This opens up the unit sale screen preset with all the details on the deal. If you continue with the sale/purchase/tradein the deal is automatically flagged as completed and removed off the list.  If you rollback the invoice created, the deal will re-appear ready to be reprocessed (or cancelled)

Deal a Unit Sale not yet on the floor

When you add a unit to sell, there is the ability to add a unit that is not on the floor.  So you can build a deal involving units you have not yet purchased from the supplier.  When you click on [Add Unit] click on Cancel when list of floor units is displayed.  You can then type in vital details of the unit to sell.

After adding such a unit, in main modify screen they will appear with red text and description 'On Order'. You cannot finalize a deal with on order units.

In order to move unit off 'on order',  you first receive the unit onto the floor as you would normally via Sell -> Purchase.  Once on the floor, via modify deal select [Substitute] option. You can then substitute the unit on order with the received unit on the floor and then proceed to finalize the deal.

Deals provide a way to manage spare part lifecycle similar to workshop jobs.  On a unit on a deal; spare parts can be sold and ordered for that unit.

Ordered parts, upon receive order will automatically update the deal and print details of the affected deal on the receive sheet.

Additionally a deal has a concept of tracking whether parts have been actually invoiced to the deal or simply flagged to be invoiced, but not yet sold out.

When you add/modify a sell unit and make it to the window that contains spare parts (and other line items) involved in the deal colour coding will reflect following:

RED - parts is on order or will need to be ordered

BLACK - part has been invoiced and supplied to the deal

When you finish editing a unit on a deal that has blue line items (to be invoiced) you are presented with following window. 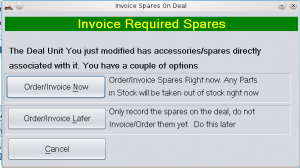 You can invoice now and parts will be automatically ordered/invoiced to the deal.

You can invoice later and parts will only written onto the deal. No actual ordering/invoicing will begin

If you choose to invoice later there are a couple of options for handling later invoice:

On receiving a spares order involving parts on a deal the receive print out will list parts to supply to deals.

When you delete items off a deal unit, or delete a unit, or cancel a deal c9 will prompt you to restock items invoiced to the deal. Similar to how workshop behaves in these situations.

Another level of sophistication associated with deals on sale is the pre-existing ability to flag service jobs as pre-delivery jobs.

When manipulating line items on a unit that are inherited from a pre delivery job you have a couple of options.

Liabilities entered are converted into unit costs on purchase and affect profit on purchased unit when it is subsequently sold.  Liabilities funcionally are same as 'on road costs' on purchase units.  The item is recorded as  a cost on the floor unit to the dealership.  Liabilities are just more obvious intuitive naming.