This version of c9 substantially overhauls how bank rec / cash rec is managed.  Previous implementation for bank rec / cash rec internally is quite complex and baroque. These changes seek to simplify things significantly, mainly to simplify transition/migration to the v5 based GL. So changes here are mostly technical but there will be some functional niceties here too, especially around reviewing / analyzing past recs. Also some bug fixes.

At its core rec boils down to three things.

A few nice things this version of c9 will deliver

The migration to this version of c9 will try as much as possible to reconstruct this rec data from prior rec database structures. But prior structures were imperfect for the task. Migration impacts:

New rec report will show if rec is good or not. Impacting bad txns will be highlighted in red with a reason provided why they are impactful. In screenshot below it is because a previously reconciled txn was deleted. 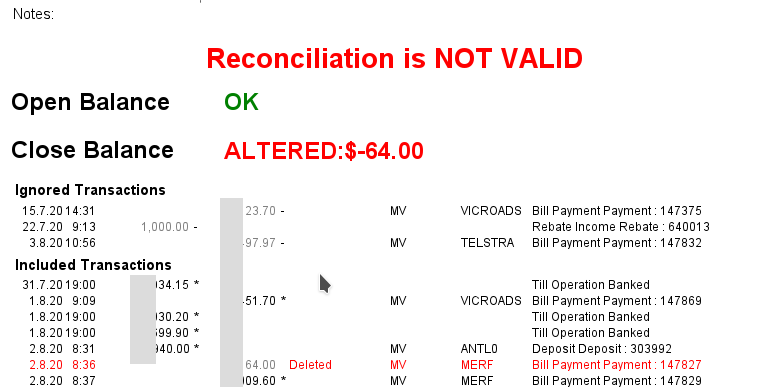 Originally the plan was to create c9 v5 so that once it is ready it will be 100% packed with a heap of things. This plan is now no longer the go. Everything planned for v5 is simply too big, bigger than anything c9 has attempted to date and simply just too much to drop into a single update.

Instead plan is to break v5 up into chunks. Deliverables and content of these new chunks are:

END_OF_DOCUMENT_TOKEN_TO_BE_REPLACED

Includes DB changes, you need to log all terminals out during upgrade

Another regression bug, sorry. Hopefully the last for a while. Problems with changes to backup system combined with remote fiche. C9 backup would try and backup parts of remote fiche data even though it shouldn't be backed up. Resulting in unnecessary network traffic and occasionally messing with backups in a way that causes verification issues : by placing remote fiche into the cloud backup even though remote fiche isn't considered part of backup : resulting in backup verification failing and creating lots of work for me hosing out that crap data.

For a couple of dealers this issue is serious enough that it can cause online website OEM diagrams to become corrupted because of a conflict between real OEM epc data and remote data. For these dealers impact is some epc diagrams will become screwy on their websites and their cloud backups will be genuinely broken in terms of the EPC bits. Again easily fixed but represents a genuine cloud backup issue with this data. The affected dealers have been directly contacted.

This version fixes/ finalizes F2 lookup changes made a couple of weeks ago. Current version of F2 is now very quick when looking at all parts, but when you look at stocked items only it is slow, significantly slower than prior versions of c9.  This version fixes this.

One of the new things F2 changes try to do is treat old superceded parts as though they are the real parts. So you can optionally easily find things by old numbers or new numbers, or barcodes or custom numbers. When you look at a old part you should also show actual price and qty on hand for the part it eventually supercedes to.

Consider part, 502 08 410 000. 5 other parts supercede to it. In F2 screen  we want to show all these but also show the qty and price on final part at end of the supercession chain so you can quickly eyeball your effective inventory without having to pick the part going to next screen. The results also need to be sorted in part number order, without regard for what part number is for eventual part it supers to.

Now when in view stock only view ,the F2 screen still needs to look at supers parts but only those parts that eventually land on a stocked item. So as soon a terminal adds part 502 08 410 000 into stock not only this part but the 5+ parts that superceed to it also need to be visible in F2 screen when f2 screen is in stock only mode, interleaved with every other stocked item which also has supers pointing to it.

Further when filtering results such on description if the filter matches an item which has alot of parts that super to it, then those old/customer/barcoded part numbers should be displayed too.

All this should now be fixed in this version of c9.  With instantaneous scrolling and part number searching in F2 screen. Database queries generally should be around under 20 milliseconds or faster to refresh if c9's server is running on a decent computer.

Following is a rough plan on how to get 25% fathers day items onto your website.   A similar setup will be ready towards end of the week for Husqvarna (waiting for KTM to provide us with promo details for Husky).