Includes database changes. You'll need to log all terminals out during upgrade

Includes DB changes. You'll need to log all terminals out during upgrade

This version of c9 introduces a new concept for tracking NLA parts.  Price file importing and management will now explicitly track NLAs and you will be able to easily filter / hide / manage NLA parts in c9 so you will have a reasonably decent visual indicator on screen whether or not a part is likely to be supplyable and are not tripping over lists of long unsupplyable items such as seasonal race apparel.

NLA stuff is best managed via c9 repo so it can only really work with suppliers that are in c9's repo. There is tooling in c9 to do it yourself from price files but it is a fiddly process that is easy to get wrong so we are not going to really press / document these minutiae of this.

Next few price files uploaded into c9 repo will be bigger than usual, as new NLA datasets propagate through into your running c9. 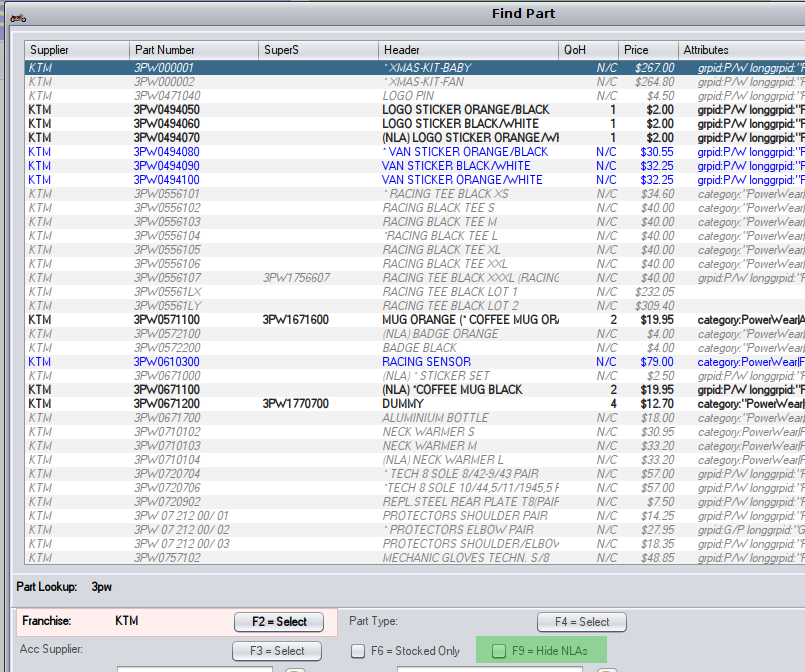 Couple of tweaks with this one

A new bank rec needs to cross check with prior bank rec to figure out what is held over, ignored etc to deal with in this new rec. The algorithm to figure out which rec to use is complicated by fact that recs can cover overlapping periods etc. Older versions of c9 simply grabbed the most recent rec that happened to start before period we are recing. But this was highly problematic because if you redid an ancient rec, this rec would become the latest, even if it was months/years prior to next period to rec.  A proper algorithm needs to consider the most recent rec only if it recs upto the last txn prior to new rec period, otherwise it needs to get the rec that comes closest to beginning of new rec period.

But an issue here: it is possible to do a bank rec where you set to date into the future. So this becomes a rec which is opinionated about closing balance it cannot possibly know.  Under some circumstances things could line up and these recs would get selected dropping in a massive tonne of discordant txns since every legit txn that happened after it was created would be from point of view of this rec, be a rec breaking txn. So tweaked algorithm a bit to generally ignore / distrust recs that claim to know more than a day into future except under some special/specific circumstances (e.g. when we are recing from a period we know happens to be on or before the recs creation date).

Design goal of c9 is for every page to load at 0.1 seconds or faster.  Some creeping performance losses over last 12 months have now been improved. Some pages, such as looking at a single part, were taking about 0.3 seconds, x3 what I'd normally like.

So comparison of website performance for a c9 website. Navigating from home page to an assembly. Comparing to a dealership with diagrams on their website but use a competitor product, not c9.

Positive website experience relies on website feeling fast. Alot of things we do at c9 to help achieve this.

This version includes database changes. You need to log all terminals out during update.

This version of c9 increases part number maximum length from 20 to 35 chars, to accommodate CF-MOTO and a couple of other suppliers that use very large part numbers.

Minimal effort has been put into tweaking reports etc so really long part numbers will overprint / underprint depending on the specific report. Tweaks will be made gradually over time to tidy as strictly needed. Most screens have been modified where possible to display longer parts.

4.846 : is a patch that is relevant here. Looks like DB changes are so heavy in 4.845 that it messes up statistics that PostgreSQL builds up to figure out best way to grab data from DB. Result is things that normally are instantaneous like lookup a part take forever. Normally this sort of thing fixes itself eventually. But 4.846 includes commands to tell DB to explicitly regenerate stats to avoid this issue.