Includes DB changes. You'll need to log all terminals out during upgrade 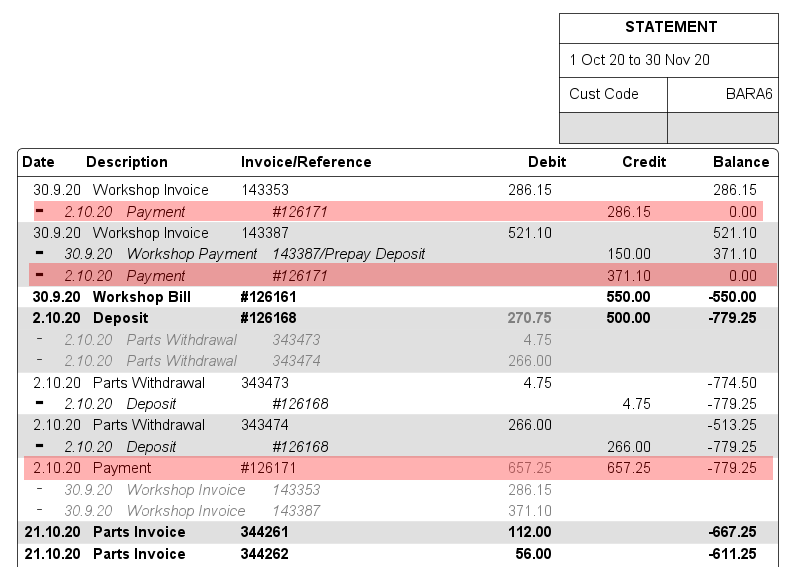 The payment in reference 126171 is used to pay two different invoices. On statement is shown on statement 3 times.

If a payment only pays off one invoice it will only show once. But open statement design wants to also display where it is utilised if more than one invoice is serviced by the payment.

The result, previously was quite confusing.  The new one, possibly still confusing but hopefully less confusing. Because when displayed in payment context, it shows tally of debits in light gray : the light gray indicates that these lines are represented elsewhere in the statement too.  Light gray numbers represents duplicated entries which are not rolled into the running balance. So hopefully you can run your eye down the statement looking at black items only, but at same time if you want to know at a glance what invoices a given payment is servicing, this information is visible too.

The following page describes how to setup your c9 to manage this promo. This will apply for either in-store sales or web sales

Make sure you do following first

The KTM price file in repo contains a couple of things  that help feed this.  Specifically promo parts are tagged as being on a promo and what promo discount is for those parts. The next steps explain what you need to do to get c9 to pay attention to these tags.

In your c9 after updating, when you look at a promo part you'll see the following in F2:

There are two tags:

END_OF_DOCUMENT_TOKEN_TO_BE_REPLACED

Includes database changes. You'll need to log all terminals out during upgrade

Include database changes you need to log all terminals out